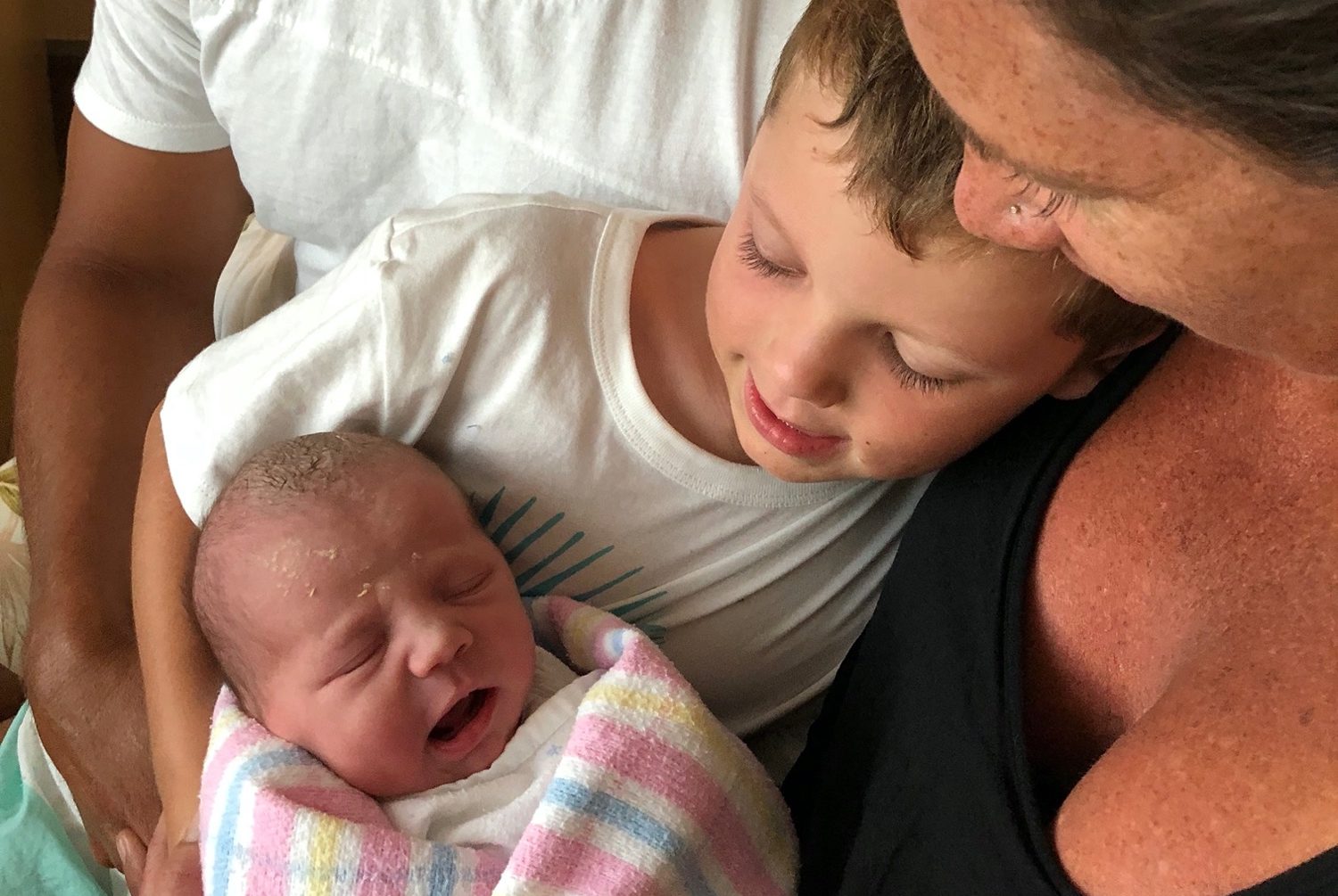 We made it to January!!!

Then we made it past new years day……..and then we had a baby!

Here is the story of her arrival, and all things considered we were very lucky and fortunate to have such a straightforward birth that didn’t even put out our daily schedule at all! You hear nightmare stories about second babies where the mother goes into labour in the middle of the night and then no one answers their phone to help her with her first born and then she nearly doesn’t make it to the hospital (or in my friends case she didn’t and ended up delivering the baby in her car on the way there!)……but I’m sorry to say, if you’re looking for a drama birth story, you’ll have to look elsewhere.

I did a workout in my garage in the morning and felt really good. Then we dropped Denzel off to my mum and went up to the hospital to see my obstetrician for an appointment. He was going to do a stretch and sweep procedure the week prior but I hadn’t let him (incase it initiated labour and she was born in December!) so the plan was to have that done today. During the examination he told me my waters were close to being broken – and then they broke!

I was admitted to the delivery ward around 10am and the waiting started. I was waiting to go into labour. I lay on the bed looking at the ridiculous painting on the wall wondering what to do with myself with all my free time. Then after what felt like hours but in reality was probably only 15 minutes I realized that lying around waiting to go into labour was a bit stupid because the only time my uterus hadn’t been having Braxton Hicks contractions for the past few weeks was when I was resting. So then a light bulb flicked on in my head and I though…..I should be doing a workout in here, that’s sure to make my uterus start contracting….especially if I do “good morning” type exercises which had really been setting it off at home the past week. So I did a little delivery room body weight circuit and by 1030am I was in labour!

The funny thing about the day was that even though it was technically a business day, being the New Year period it wasn’t business as usual at the hospital. Yesterday, being a public holiday, there was an anaesthetist rostered on call but some hospital oversight had meant that there wasn’t an on call anaesthetist rostered to work today (but also none working in the hospital on normal duties). “Well how the hell do I get an epidural when I want one?” I asked the midwife. “Don’t worry” she reassured me, “there’s plenty of anaesthetists we can call and ask to come in but they don’t have to if they don’t want to and then we’ll just call the next one”…….wow, that sounded reassuring!!

So when I went into labour at 1030am, there happened to be an anaesthetist in the room next door who had just finished a procedure. “Do you want him to come in and give you an epidural now before he leaves?”……………”I’ve only just gone into labour a minute ago, I think that’s a bit premature!” The thing about epidurals are that they are great for relieving the pain of second stage labour and delivery (and I’m intolerant to all other pain killers so I can’t have the gas or other drugs so for me it’s an epidural or nothing) but they also slow down your labour which is not a good thing. So my thoughts were (and still are) to have one if you want one, but only when you need it – best of both worlds. So getting an epidural at that time was absurd so I sent him on his merry way and crossed my fingers that he or someone else would come back when I needed them.

Suddenly the hospital got really busy. The midwife had wanted to do an examination on me to see how my labour was progressing (by measuring the dilation of my cervix – it starts closed and when it gets to 10 on the number scale it’s fully open) but she got so busy that she set up the bed and never made it back to see me until I called her in. My contractions started getting longer, more painful and closer together at a rapid rate. At about 1230pm I decided that the epidural would be great any time now! My midwife still hadn’t had the chance to examine me but the pain I was feeling with minimal relief in between told me my labour was well underway. It took ages to find someone to come in and then they took a while to get there…..by this stage the pain was so bad I had to tell everyone to shut up when the contractions came and take my mind to the place I go during a really hard training session to try to block out the pain. I guess that’s what meditation is but I’ve never really tried it without being in pain.

I didn’t think the anaesthetist was going to make it before I had the baby…….but then he did and the epidural was performed. It was a light one and I could still move my legs and move on the bed but at least it took the edge off the pain. It’s probably a better way to go than a deep one where you can’t move your limbs at all (which is what I’d experienced with my son). The midwife finally had time to examine me and I told her I thought I’d probably be nearly ready to have the baby. She laughed as she started her examination and said you’ve only just started your labour……then she yelled out to her colleague ……”call Brandi’s Obstetrician, I can feel the baby’s head!”

She asked me to push a little to see if I was ready to push (it’s hard to know what a little is when you have an epidural) and then quickly told me to stop or I would’ve pushed her out! I wanted my Obstetrician there for the delivery because there had been some small complications with Denzel’s delivery and I wasn’t taking my chances.

My obstetrician arrived, examined me, told me I was ready, asked me to push ……and out she came!!!

4 hours of labour from start to finish and 1 push was all it took for my second and last pregnancy to be over. My family is now complete!